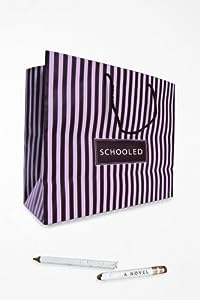 The book Schooled arrived at my house as I must be on a list at this particular publisher.  I put the book in my pile and then ended up seeing it at the local book store which put Schooled closer to the top of the pile.  I had not heard about the book until I opened my mail.

Schooled is written by a former teacher at the Dalton School in NYC.  The book centers around a new teacher, fresh out of Columbia University, teaching English at one of the elite private schools in Manhattan.  As the teacher, Anne Taggert, starts to navigate the private school world of parents and students, she enters the underground world of tutoring.  Hence, the story unfolds.

I grew up in the public school system.  The private school system is a completely different world.  Every private school is different and each school has reputations that precede them.  The tutoring aspect of many of the private schools is something that amazes me.  My friend and I have had many conversations about this particular topic as both of our kids schools are totally different.  There are many tutors, as Anne Taggert in the book, that are not really teaching the kids how to do the work but are doing the work for them.  We both ask ourselves, what is the point?

My friend guesses that about 80% of the kids she knows are tutored.  80%.  That is a pretty shocking number.  It makes me wonder if the curriculum that is put forth in the school is not in touch with the abilities of their students.  If that many kids need a tutor to get through the curriculum, are they actually learning or just holding their head above water.

I also wonder if kids are given the opportunity to find themselves through learning.  You get to school, a curriculum is forced upon you, mostly math/science driven and it ends up you are a fantastic writer or a photographer but weren't given the tools or opportunity to figure that out because the school didn't provide that.  Many of the kids in private school who are tutored and if you believe the book or the chatter on the street, that the tutors do the work, what happens when the kids get into college.  How do they get by there?  Or is it just that the hardest part about college is getting in?

Obama is only giving out cash to states that are following the plan that Arne Duncan ( Secretary of Education ) is putting forth.  Granted this particular book is private school driven which comes with a completely different set of issues from public school…the biggest one being the parents expectations as they are paying for the education over and beyond their taxes but as we change our system to be more in line with a 21st Century education what does that mean?

Many schools have the same amount of teachers, same curriculum from 1960 with a completely different set of learners and issues in 2009.  How do we help steer kids down a path that is the right path for them.  Left brain thinkers, right brain thinkers, kids that would be better suited to being a mechanic or a writer or a on-line game developer or even a surgeon.  In France they assess a kids path around the time they are 14 and send them in that direction.  I am not sure that is the right answer as there is something to be said for all kids learning basic math, history, english and science yet at what point do we separate different learners.

Is it an interesting topic of debate which we should be having as huge sources of cash are being distributed by the federal government to each states education system.  This particular book, although certainly trite, recognizes that it is the kids that need to learn not the adults hand holding their kid through the process.  Otherwise, how do the kids become independent adults through their own intellect.

One line from the book that I couldn't agree with more is "Students become so accustomed to their tutors assistance that they were now conditioned to mistrust their own abilities".  That is something that shouldn't happen in any education system.  How does this country continue to be the best if in private schools there are 80% of the kids in some schools being tutored and in public schools they are being forced to teach to a test and standardized curriculum that doesn't allow for creativity or left brain vs right brain thinkers.  At one point, something will give and we will have lost an entire generation of writers, artists, surgeons or even mechanics.