I have known Alex for quite a while. I have talked to him about Russia and Ukraine many times. He went back to see his friends who are still there a few years back. He wrote this post, and I want it to be ready by as many as possible. It comes from the heart, and he knows because he is a Russian emigre.

This is his piece below.

31 Years ago, my family and I left then Soviet Ukraine as Jewish refugees and landed in United States. It now feels like an eternity ago. We had $2,500 in our pockets. We were scared. We didn’t know what to expect. We came from behind the barely lifted Iron Curtain. We thought that capitalism was evil. We were brainwashed, and uninformed.Like many people’s immigration journey, ours wasn’t easy. We had to eat dirt for a few years – mom and dad worked odd jobs, I went to community college because I didn’t speak English, and back then, shopping at Gap was unattainable. Our struggles felt real, but they were not the kind of struggles Ukrainian refugees and families in Ukraine experience today. We immigrated by choice and had 30 years of America Dream ahead of us. Today, Ukrainian families are being murdered and forced out of their country by a modern day Hitler. The unfathomable, incomprehensible devastation, the unnecessary, unimaginable loss of human life, the breaking of families, murder of innocent children, the rape of mothers – what is happening right now in the country where I was born, is beyond anything my brain can process and my soul can internalize. I just can’t. We are faced with an extreme, exceptional, unprecedented kind of evil, and we need to stand up to it – we – Ukrainian people, we – American people, we – the citizens of the world. I want to fly to Ukraine and join the army. This is how I feel. I think I want do that. The irrational part of me is itching to do this. Thats’ how angry I am. I have never felt such anger. The rational part of me says that it makes no sense, and I know that. Instead, I am dedicating myself, my time, my skills, my brain, my heart to Ukrainian families, to Ukrainian refugees through 1kproject.org – a direct relief effort that I founded to empower families in United States and around the world to send $1k to a Ukrainian family impacted by this insane war. I am grateful to so many who supported the project – in the last few weeks we raised over $4M to support 4,000 families. Thats more than 10,000 children, thats single mothers, thats humans who have been shot at, whose homes blew up, who ran out in a T-shirt, broke, embarrassed, but never broken. I am so inspired by the strength and the resilience of the Ukrainian people. Here are some of their stories. 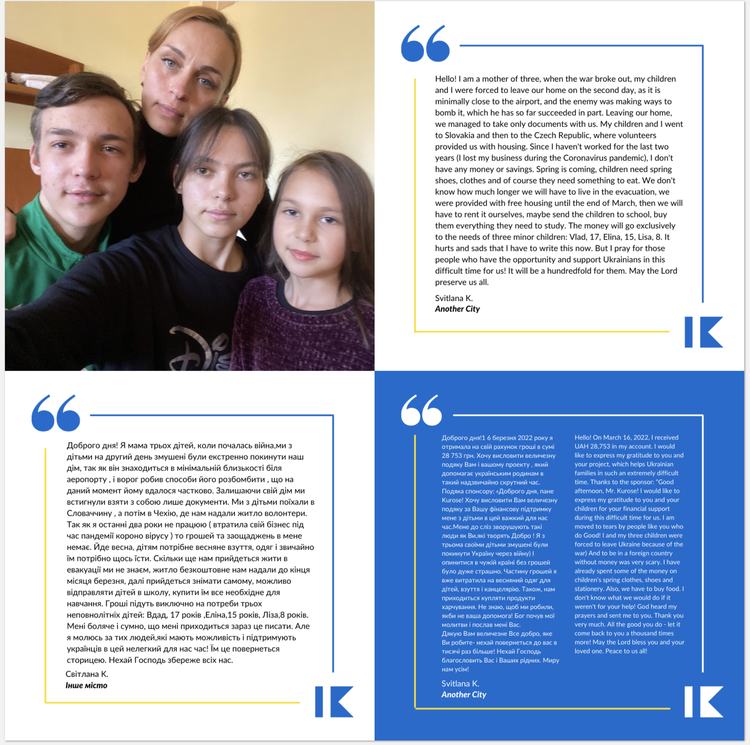 And there are so many more.I hold a deep belief that there are times that aren’t ordinary times. Each generation faces new, different types of challenges and crisis. These are truly extraordinary times of our lives, and these are the crisis we need to face.My wish. My only wish right now, is for the war and killings to stop. But I know that this isn’t up to me.As a refugee myself I know what I can and what I have to do. I have to help the Ukrainian families.So for as long as needed, and for as long as I can, physically and emotionally, I will.